While quitting smoking is a healthy move, it’s also a tough one. People have tried nicotine patches, nicotine lozenges, nicotine gum. They’ve turned to hypnosis, support groups and acupuncture. Because everyone is unique, different methods have had varying levels of success for different people. One method that can work for anyone who wants to quit smoking is e-cigarettes. Here’s why.

An intense craving for cigarettes is one of the most prominent withdrawal symptoms people experience when they attempt to quit smoking. And that craving can hit on both the physical and emotional levels. Your body may crave the nicotine, and your mind may crave the ritual that’s been established surrounding the habit of smoking.

E-cigarettes can help sate cravings on both the physical and emotional levels, particularly if you opt for a tobacco e-liquid that provides a real tobacco taste. Choosing a tobacco e-liquid, rather than a sweet or food-like flavor, can most effectively quash cravings since it most closely resembles the taste of a real cigarette

Nicotine is a drug known for suppressing appetite, boosting mood, enhancing concentration and short-term memory, and producing a sense of wellbeing. Quit smoking cold turkey and you’re likely to experience a litany of withdrawal symptoms that typically include:

Rather than trying to give up nicotine in one drastic move, e-cigarettes let you gradually reduce your nicotine intake to gently wean your body off the drug. Most e-cig juice companies offer different levels of nicotine, which lets you start with the highest level and work your way down all the way to zero. 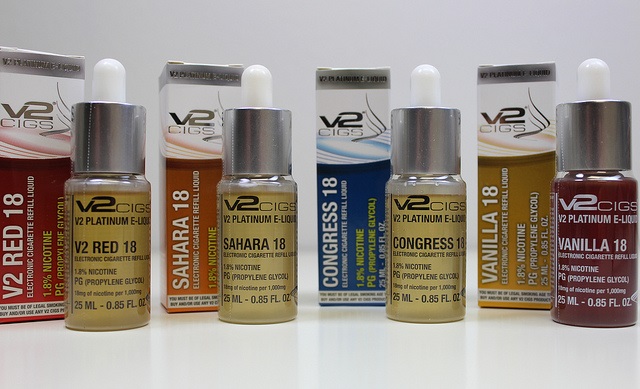 While nicotine plays a huge role in the physical aspect of smoking, many other factors play a role in the mental aspect. If you’ve been smoking for some time, you may notice that smoking has become second-nature, or even a ritual.

E-cigarettes allow you to maintain those same rituals, instead of trying to break them entirely. They give you the same hand-to-mouth action as cigarettes and give your hands something to do.

When you’re trying to break a bad habit that’s long been entrenched in your brain, attempting to simply give it up isn’t likely to work. The key is not to just give up an old habit, but to replace it with a new habit. That’s exactly what you’re doing when you turn to vaping and e-cigarettes.

Make a conscious effort to reach for your vape and e-cig juice instead of reaching for a cigarette, and you may find your new habit firmly established after about six weeks. Then you can start gradually reducing your nicotine intake until your body is fully weaned off nicotine.

Once you take care of the physical side, you can start working on the mental side. Perhaps you’ll eventually replace your e-cigarette habit with a different action down the line. But even if you don’t, you will have successfully put down cigarettes, which is a mighty accomplishment within itself.

What Happens When a Pedestrian Causes Damage?
Vaping And Fashion: When Is It OK?
Comment